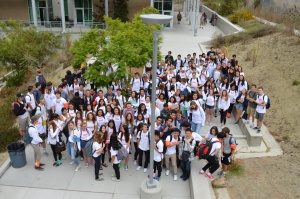 The Class of 2018 poses for a group photo at the beginning of Senior Assassins.

The current website was designed and created by Joey Babcock.

It features a bot that runs once a minute to update player stats and other things like responding to tweets and sending emails.

The rules of Senior Assassins for the 2017-2018 school year are published at sa.sagecreekhs.com.