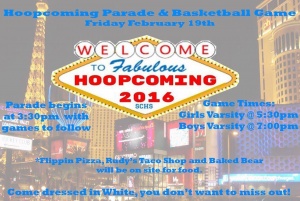 The theme of Hoopcoming 2016 was supposed to be "Las Vegas", however due to the culture involved this was never explicitly stated. Many images relating to Las Vegas were used, but no explicit mention by ASB or the school was made.