She won NBC's November 2012 Inspiration Teacher of the Month[2].

Evans was known for leading pep rallies, often asking for “complete silence of the bobcat arena” before beginning various segments of the rally.

She was affectionately named “Pterodactyl Teanna” by one of her students for her piercing voice, which was audible above even the loudest of crowds. 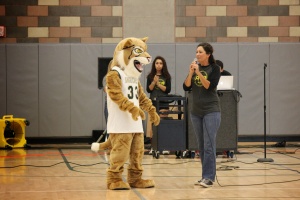 Evans leads a pep rally for the Class of 2017 and Class of 2018, the only two in attendance during her run as adviser.
Retrieved from "http://history.sagecreekhs.com/index.php?title=Teanna_Evans&oldid=3643"
Categories: